A commentary by Rainer Rupp.

On May 3 last week, the International Press Freedom Day took place. As was to be expected, the ruling elites of the noble Western democracies, together with their subservient spirits in the so-called “free” state and corporate media, congratulated themselves above all. All this happened according to the maxim of the Pharisees known from the Christian Bible. They were said to be tireless in thanking God that they were better people than all the others. In fact, however, they surpassed all the others in deceitfulness. No wonder, then, that even today hypocrites, pretenders, self-righteous people, or simply “false fifty-euro bills” are called Pharisees.

In this year’s competition for the position of the chief Pharisee on the occasion of the World Press Freedom Day, U.S. Secretary of State Antony Blinken took the cake. In his usual sanctimonious manner, he spoke out against other countries and exhorted them to respect the values that he and his Biden government in Washington have been violating in a particularly flagrant manner for years.

In his almost religious sermon – which has to be listened to be believed – Blinken declared that in a democracy, few things are more sacred than “independent journalism.”. In an interview with the Cold War-era “Radio Free Europe,” Blinken paid tribute to the “World Press Freedom Day” and hypocritically stated that “the United States stands strongly with independent journalism.” Further, the fake fifty stated that it is “the foundation of any democratic system” requires “holding leaders accountable” and “informing people“. ( …) Countries that don’t do that, that deny freedom of the press, are countries that don’t have a lot of confidence in themselves or in their systems,” he added, referring to Russia.

American journalist Glenn Greenwald commented on this hypocritical speech by the Pharisee-in-Chief Blinken as follows:

„That the Biden administration is such a stalwart believer in the sanctity of independent journalism and is devoted to defending it wherever it is threatened would come as a great surprise to many, many people. Among them would be Julian Assange, the founder of WikiLeaks and the person responsible for breaking more major stories about the actions of top U.S. officials than virtually all U.S. journalists employed in the corporate press combined.“

Greenwald knows what he is talking about when it comes to U.S. press freedom. He became known primarily when he prepared the documents on the top-secret NSA surveillance program PRISM sent by Edward Snowden in 2013 and published them in early June 2013 in the British daily newspaper “The Guardian” together with an interview of Snowden.

Currently, Assange sits in a cell at Britain’s high-security Belmarsh prison as the Biden administration continues to pressure for his extradition. Even more than the Trump administration, the Biden administration is eager to put investigative journalist Assange behind bars for espionage and throw away the keys to his cell. For the Biden administration, even more serious than the exposure of many serious U.S. war crimes is the fact that the manipulation of the primaries in favor of Hillary Clinton by the leadership of the Democratic Party has also become known through Assange. This wheeling and dealing is likely to have contributed significantly to Mrs. Clinton’s electoral defeat. In its aftermath, the Democrats then attempted to distract attention from their criminal violations of election laws with their fabricated Russia-gate story about alleged collusion between Trump and Putin.

Although a British court’s ruling in January of this year rejected Assange’s U.S. extradition request, the Biden administration continues to insist and has appealed the decision. Even the New York Times, which is otherwise hand-wringing toward Biden, recently noted:

„This week, human rights and civil liberties groups had asked the acting attorney general, Monty Wilkinson, to abandon the effort to prosecute Mr. Assange, arguing that the case the Trump administration developed against him could establish a precedent posing a grave threat to press freedoms“

Yes yes, freedom of the press, that is the precious value that U.S. Secretary of State Blinken is never tired of celebrating and defending as one of the highest U.S. assets during his trips to foreign countries throughout the last week. What character does it demonstrate when someone like Blinken flies around the world bemoaning the persecution of independent journalists in other countries, while his own government, in which he holds one of the top positions, does everything it can to destroy one of the most consequential independent journalists of recent decades?

In fact, even the Obama administration, in which Blinken also held a top position at the time, limited basic press freedoms. Under Obama, for example, twice as many whistleblowers who leaked documents about government crimes to journalists were convicted using spy laws than under all previous administrations combined. In 2013, Blinken was Obama’s deputy secretary of state. At that time, the US- Committee to Protect Journalists issued a report that even warned of an epidemic of U.S. government attacks on press freedom. It stated, among other things:

„In the Obama administration’s Washington, government officials are increasingly afraid to talk to the press. Those suspected of discussing with reporters anything that the government has classified as secret are subject to investigation, including lie-detector tests and scrutiny of their telephone and e-mail records. An “Insider Threat Program” being implemented in every government department requires all federal employees to help prevent unauthorized disclosures of information by monitoring the behavior of their colleagues.“

Jane Mayer of the New Yorker said of the Obama administration’s attacks on press freedom:

“It’s a huge impediment to reporting, and so chilling isn’t quite strong enough, it’s more like freezing the whole process into a standstill.”

James Goodale, chief legal counsel for The New York Times in the 1970s during the release of the Pentagon Papers, had predicted at the time that “President Obama will surely pass President Richard Nixon as the worst president ever on issues of national security and press freedom.”.

In his video interview with “Radio Free Europe” already mentioned at the beginning, Blinken naturally had the evil Russians in his sights again and accused them of a particularly perfidious “attack on the freedom of the press”. But this, as well, was only hypocritical propaganda and, moreover, quite clumsy propaganda. Blinken was very concerned about the freedom of the U.S. and other Western media, which would be hindered in their work in Russia by a new law.

After all, the Kremlin is now demanding that media outlets working in Russia, such as Radio Free Europe, which are affiliated with foreign governments and/or paid by foreign countries, must register with the Russian government as “foreign agents” and pay heavy fines if they fail to do so. However, Blinken was so drunk with self-righteousness that he totally forgot in his Russia-bashing that Moscow is now just making up for what Blinken’s henchmen in Washington have been demanding for years from foreign media working in the US. In fact, Russia has merely responded to the U.S. government’s earlier, ultimate demand that RT (Russia Today) and other Russian news outlets in the U.S. be required to register as “foreign agents.”

At the same time, Blinken has completely brushed aside the escalating attacks by his colleagues in the Biden administration last month against Russian news outlets. In Washington, the justification for this ambiguous policy is that Russian media in the U.S. work as propaganda agents for the Kremlin and seek to influence U.S. elections, while U.S. media in Russia are committed solely to the truth and report on developments in the country in an unbiased manner.

However, the world has changed. The masquerade of human rights, democracy and freedom of the press with which U.S. diplomats around the world knock on government doors has long been recognized by the vast majority as a complete farce. Hypocritical self-righteousness alone, however, cannot explain Blinken’s recent lectures on press freedom and his self-confident appearance as a champion of the rights of independent journalists. There is also a good portion of self-delusion, coupled with delusions of megalomania and omnipotence. This is omnipresent in Washington.

Is death a master from Germany again? | By Rudolf Hänsel 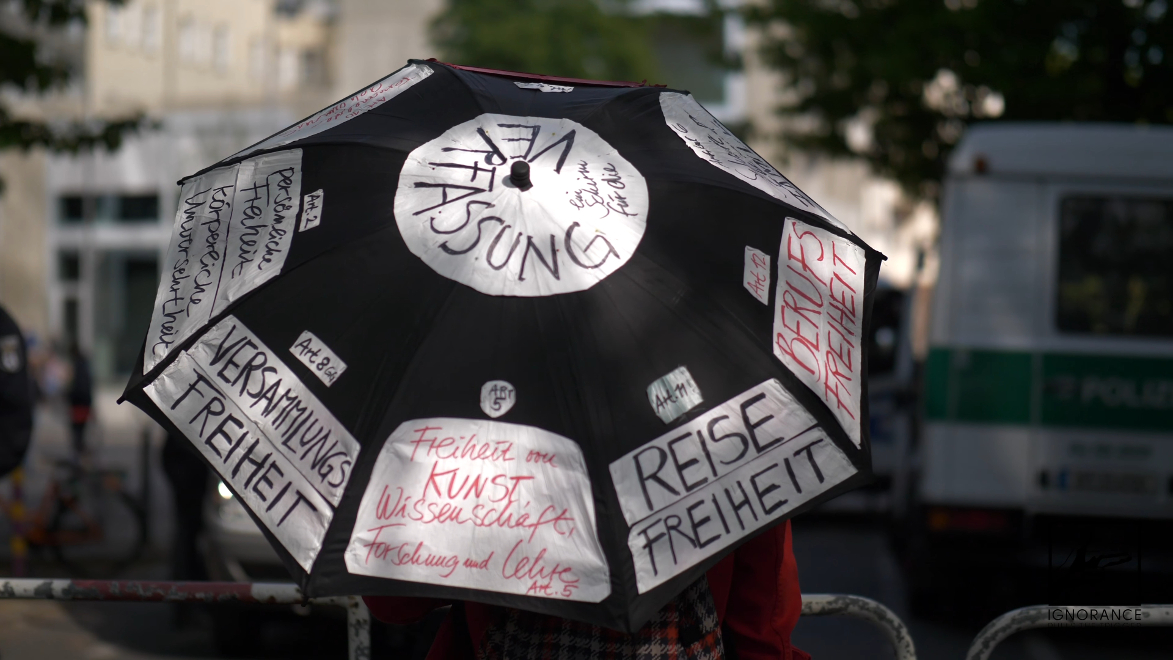 Ignorance Meditation on 9 May 2020 in Berlin

Permanent accusations and provocations against Russia